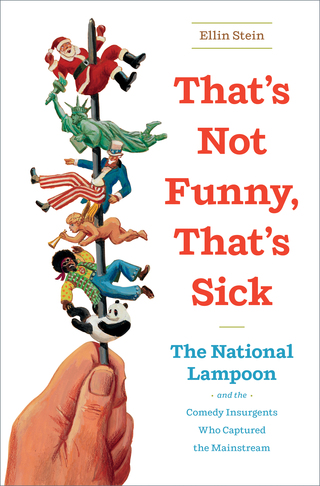 That’s Not Funny, That’s Sick: The National Lampoon and the Comedy Insurgents Who Captured the Mainstream

“This rich history of humor, commerce, and backstage conflict is recounted in lively prose and admirable detail by veteran entertainment writer Ellin Stein in That’s Not Funny, That’s Sick. Buttressed by dozens of original interviews, as well as access to older ones and to all the yellowing back issues, That’s Not Funny captures neatly the eccentric personalities and fiery times that converged to propel radically offensive material to the forefront of the American consciousness.”

“If you ever picked up an issue of the National Lampoon, or misspent your youth in the sixties and seventies; if you ever wondered about the origins of Saturday Night Live or, in fact, ever had any interest in the course of American humor from the late sixties onward, this is a book to read... Always integrating her tale within the context of highly politicized and volatile times, Stein presents the Lampoon story as a vital aspect of American History - which in fact it is, since their no-holds-barred parodies became at the time a major component of mainstream culture critique.

Whatever you thought of their brand of humor: arrogant, misogynist, racist, puerile, anti-Semitic - and it was all those things - it was generally good for some riotous belly laughs. And it presented its youthful cohort with a sort of anti-manifesto, an in-your-face, up-yours attitude with which to come down from the lost highs and failed dreams of the counter-culture - or at least provide the ironical stance with which to conceal some serious white guilt about it, (after all it was their fathers who had dragged us all into the wars, scandals and ecological predation of the era.)

Stein actually raises questions about the ultimate effect of their critique at the time and its aftermath today. Were the Lampoons and SNL truly political? Was their work in fact satire at all? A loosely affiliated writer, Carl Gottlieb, claimed that “SNL was far more into iconoclasm than satire... Iconoclasts aim to shatter images, ideally in the rudest way possible. O’Donoghue’s Mr. Mike, poking sticks in the eyes, was a great shocking joke but not at the expense of any institution.” Stein states that “The Saturday Night approach encouraged the viewer to see all political figures as either corrupt or buffoons, and implied that politics in general was a sordid, ridiculous business that anyone cool would not waste their time on.” By then, it seemed “more productive to go after the true Masters of the Universe: multinational corporations.”

At any rate, this approach to the powers that be has clearly shaped the way contemporary humorists treat them and contributed to the almost bipolar attitudes of the country at large regarding the corporate/political complex. We consider these ‘power players’ more often as absurd, comedic thespians, allowing ourselves to slide into a state of indifference about the ultimate effect of their actions, and then we kick and scream when the country goes to hell… I found myself sticking to That’s Not Funny, especially as the disenchantments, dissensions and rivalries of the key group became more enmeshed. I gained more appreciation for the luminaries - Michael O’Donoghue, Dan Akroyd, Chevy Chase, Henry Beard, Bill Murray, P.J. O'Rourke and Lorne Michaels - and for how this serendipitous collusion of divergent talents forged such a dynamic ensemble. That’s Not Funny takes you on a ride through what was, arguably, the heyday of American humor. Today the crudeness, take no prisoners approach set in motion by the Lampoon et al has merely become the status quo. Ah, those were the days, right? When we could sneer with insider cool at the lamentable state of American culture.”
–Ellary Eddy, Realize Magazine

“It’s not much of stretch to call this exceedingly thorough and wildly entertaining history of modern American comedy a bible on the subject. Ellin Stein goes deep and dirty on the topic. The names (Michael O’Donoghue, P. J. O’Rourke, Anne Beatts, Christopher Cerf, Paul Krassner, George W. S. Trow, to name a few) comprise a humorist hall of fame. Stein gets the unfiltered dope on the snotty gang of irreverent Harvard grads who highjacked the prevailing corny, pre-fab comedy culture of the 1950s and infused it with whip-smart satire, withering parody, and dead-on disenchantment with the we’re-number-one ethos of American pop culture.

But this is no hagiography. The players in this story get no special treatment. The hundred or so writers, performers, and producers interviewed are all given free rein to assess and critique themselves and each other with the kind of caustic candor one would expect from such ambitious and accomplished smart-ass wisecrackers. Some became rich; others became rich and famous; a couple died in splashy, ignominious, drug-related scenarios. The cliché that comedy isn’t pretty has never rung truer than in this terrific recounting of the comedy juggernaut set in motion by Harvard Lampoon editors Henry Beard and Doug Kenney.

But these guys rocked it hard and fast, and no one was more surprised by their success than they were: “We can actually make money by being sophomoric assholes?” Yes, they could, and they kept on going without looking left, right, or center—well, maybe center. They were greedy for the good stuff, too: the money and prestige that came with being the country’s number-one source of snit and snark. In 1966, these guys had sold 450,000 copies of their Playboy parody in less than a week; what might the real world of humor publishing bring? This is the question Stein explores to glorious effect, complete with the jealousy, infighting, and power-jockeying that attends any highly successful made-for-show-biz endeavor... The new staff of National Lampoon deviants differed from their WASPy, East Coast, Harvard predecessors. The writers on the new Lampoon were almost all Jewish or Catholic. Kenney was a Midwestern kid from Chagrin Falls, Ohio, and P. J. O’Rourke, who would join the staff in 1971, was from Toledo. And these guys weren’t satisfied going after their parents’ tired mores. They were willing and eager to take on the target-rich clichés of their own generation—and the occasional photo of a naked woman with large breasts didn’t hurt sales, either.

In 1972, the Lampoon was offered a record contract for a comedy album and Christopher Guest, who would later produce such classic comedy films as This Is Spinal Tap and Waiting for Guffman, was brought in as musical director for a live comedy stage show mocking Woodstock, called Lemmings. (The jokes were mostly about music and drugs, and John Belushi began his Joe Cocker impression in the show.) From there, the magazine began morphing into other forms of humor/comedy, which would ultimately include the television show that will not die, Saturday Night Live, and such movies as Animal House, Blues Brothers, and the series of Vacation films, which were based on a Lampoon piece by John Hughes, later of The Breakfast Club and Ferris Bueller’s Day Off fame. The life story of cofounder Doug Kenney, who died falling off a cliff in Hawaii in 1980, is the thread that connects this impressive, all-encompassing, 50-year history of boomer comedy and the people who created it.”
–Michael Heaton, Weekly Standard